Everyone seems to be worried about coeliac disease (CD) these days. Everyone else is on a gluten free diet anyway. The naturopaths are also homing in on this bandwagon. How accurate are those blood tests? Or to be specific, what is the specificity and sensitivity of the serological screening tests? Why do we still need a duodenal biopsy? In recent years, there have been significant changes in our understanding of CD and it’s important to review the pathogenesis, diagnosis and the natural history of the disease as it stands in 2019.

There has indeed been a substantial increase in the number of patients diagnosed with CD even when we allow for more serological tests being done, more patients being aware of the subtle symptoms and our index of suspicion had increased. Sadly, a whole lot more remain undiagnosed. Nonetheless, reported prevalence of 0.5–1% of the general population (Table 1), with the exception of areas with low frequency of CD-predisposing genes and low gluten consumption (e.g., sub-Saharan Africa and Japan) [1-4].

Just like other auto-immune diseases, CD has a strong hereditary component as testified by its high familial recurrence (~ 10–15%) and the high concordance of the disease among monozygotic twins (75–80%) [5]. The key genetic associations are the HLA-DQ2 and HLA-DQ8 antigens. However, HLA-DQ2/DQ8 is quite frequent in the general population (25-35%) and only 3% of these individuals will go on to develop CD (6). There are hundreds of non-HLA related genes associated with CD but their relevance is still being studied.

The disease can occur at any age from early childhood to the elderly, with two peaks of onset – one shortly after weaning with gluten in the first 2 years of life, and the other in the second or third decades of life.

One of the limiting factors in CD research is that there is no reproducible animal model of CD. In CD, we know that the environmental trigger is gluten and the auto-antigen is tissue transglutaminase (tTG). Gluten containing grains are only a recent addition to the human diet. It is a group of indigestible proteins – gliadins in wheat, hordeins in barley, secalins in rye and avenins in oats. Partially digested gliadin fragments interact with chemokine receptor 3 on the apical side of epithelium and triggers increased intestinal permeability which in turn facilitates further entry of gliadin into the sub-epithelial lamina propria. This sets up a whole host of complex immune reaction which initiates the CD enteropathy. In susceptible individuals, further interplay between the HLA-DQ2/DQ8 antigen and transglutaminase adds further fuel to the fire.

However, the traditional paradigm of gluten exposure in genetically susceptible individuals leading to CD is being questioned. Besides genetic predisposition, exposure to gluten, loss of intestinal barrier function, a pro-inflammatory immune response triggered by gluten, inappropriate adaptive immune response, and an imbalanced gut microbiome all seem to be key ‘ingredients’ of the CD autoimmunity recipe.

Improved hygiene and lack of exposure to various microorganisms is said to be linked with a steep increase in autoimmune disorders in industrialised countries over the past 40 years [7,8]. The combination of epidemiological, clinical, and animal studies suggests that broad exposure to a wealth of commensal, non-pathogenic microorganisms early in life are associated with protection against CD and that pre-, peri-, and post-natal environmental factors may strongly influence the gut ecosystem [9].

Neonates at family risk of CD had a decreased representation of Bacteriodetes, a higher abundance of Firmicutes and a diminished representation in Lactobacillus species in their microbiome [10]. Associations, however, does not necessarily mean causation and more studies are needed. 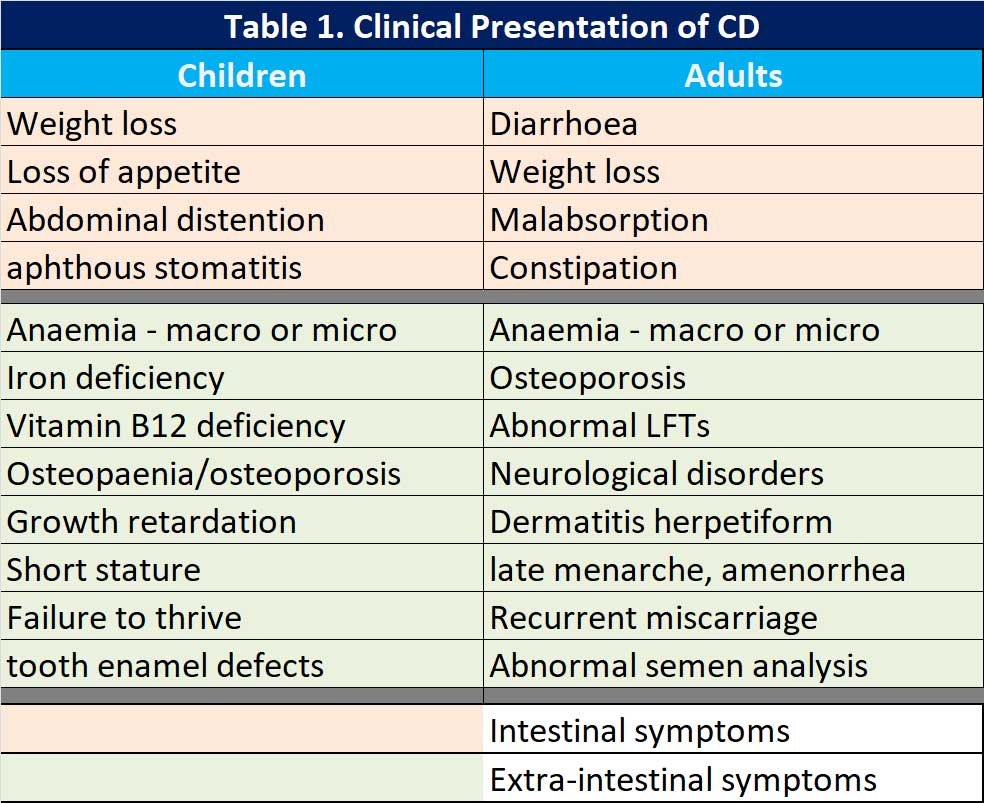 When the “classical” symptoms are present, life is easy but symptoms can vary from patient to patient with CD. In 2011, the Oslo classification of CD identified the following clinical presentations: classic, non-classic, subclinical, potential and refractory [11]. The potential form of CD is characterised by positive serological and genetic markers with a normal intestinal mucosa and minimal signs of inflammation. Refractory CD (RCD) is characterised by persistent symptoms and atrophy of the intestinal villi after at least 12 months of a strict gluten free diet (GFD). There is a new category added since the Oslo classification, seronegative CD – negative serological markers but have clinical signs of severe malabsorption and atrophy of the intestinal mucosa. Naturally, other causes of enteropathy have been excluded.

Others have classified the symptoms into either intestinal and extra-intestinal symptoms (see Table 1).

The diagnosis of CD is still confirmation from a duodenal biopsy after a positive serology. Because none of the serological tests have specificity or sensitivity of 100%, it is common that we perform anti-tTG, anti-gliadin and anti-endomyseal antibody tests. It is also for the same reason that we still need a duodenal biopsy for confirmation.

Current practical approach uses the 4 out of 5 rule to establish the diagnosis:

The European Society for Paediatric Gastroenterology Hepatology and Nutrition (ESPGHAN) suggest perhaps, skipping the biopsy part in paediatric patients with high titres (over 10 times the cut-off) of anti-tTG with positive endomyseal antibodies and positive HLA-DQ2/DQ8. Other jurisdictions have not follow suit.

It has been widely shown that the diagnosis of CD after the age of 50 and/or not following a strict GFD can lead to a higher mortality compared to that of the general population (See Table 3). Fortunately, the incidence of these complications is in the order of 1% of the patients diagnosed with CD. The most common of these complications is hyposplenism which can be identified in up to 30% of patients with CD. A small size spleen on abdominal ultrasound warrants a request for Howell-

Jolly bodies on peripheral blood smear. Hyposplenism increases the risk of pneumococcal, haemophilus and meningococcal infections and vaccination against these encapsulated bacterial is recommended.

Upon confirmation of the diagnosis of CD, we need to:

Breastfeeding, modality of delivery, and time of gluten introduction in the diet of infants at risk for CD may affect the incidence of the disease. However, the data supporting the role of these factors in the risk of developing CD is limited. Two recent landmark studies [13, 14], which prospectively screened infants with a first-degree family member with CD from birth, found that CD develops quite early in life in this risk group, demonstrating that early environmental factors may be crucial in the development of CD.

Gut microbiota as the key element for possible innovative preventive strategies. Interestingly, rotavirus vaccination seems to significantly decrease the risk of CD, in particular among children with early (before 6 months of age) gluten exposure.